Head teachers used to have to write entries about their school in an official "School Log Book".  We have found many of these at Muskham, some of which go back to before the building was opened in 1965.  This means that when the building opened, they must have been moved with the school's belongings from the old school house building in North Muskham.  Compare our school website and newsletters today to the pages from the log books that you will find below!
My mother Lilian Macdonald is 3rd from right on the back row. The family lived at Grange Farm, Bathley at the time.  Best wishes, Howard Drake, Sutton Coldfield.

I think the boy at front left in the 1919 hockey team picture is my Uncle Tom (Jackson).

I was interested to see the log book from 1919, stating that Mr King joined as headmaster. He was still at the school along with his sister (Miss King) when I started at the school in 1956. These two also taught my Dad in the 1920s.

Our school building was officially opened in 1965 with many distinguished guests and speakers.  The event had its own programme printed.  Can you figure out which parts of the current building are shown on the front cover?

Thanks to Miss Clare Pollard (North Muskham) for the scan of the programme.

I was at Muskham School from 1976 until 1982. I remember my time there fondly and formed a good friendship which I value greatly. Mr Glendenning was headteacher at that time with Mrs McClelland, Miss Smith, Mrs Halstead, Mr Lane, Miss Davenport and Mrs Stevenson. I have many fond memories but my favourites are: Netball matches with Mrs Stevenson when we lost in the Newark Schools final to Highfields, rounders with Mr Lane, indoor fireworks with Miss Davenport (who subsequently baptised my 2 sons and niece in 2006 and 2008), cycling proficiency with Miss Smith and the lovely Mr Saville (caretaker).
House points, I was in Blue House. Sports days were good, particularly the potato race. Recorder lessons and playing on the glockenspiels. Fond, fond memories which I cherish and share with my children.
Nicola Peters (Nee Hold)
I remember lots about my time at Muskham School (1978 - 1983). The 50/50 test in Class 5 with Mrs Stevenson, making a yellow stuffed duck in Class 5 sewing. The afterschool craft club run by Mrs Halstead - especially making the different wool dyes out of natural ingredients. PE with Mr Lane, Netball with Miss Smith and Mrs Stevenson including winning the cup.
I remember the Christmas parties and Film club. My film club card had a terribly drawn Mickey Mouse (my drawing has never improved - sorry!).
Pink custard and Manchester tart, butterscotch tart and cornflake tart. I remember getting the serving wrong one day and cutting the pie into 6 instead of 8 - not a good day.
The pottery kiln - and pottery club, Mum and Dad still have some of the pottery ornaments I made.
House points and Blue house, so proud to be in Blue house.
Heaps of fun and funnily enough now my children now go to a school quite similar to Muskham. SImilar size and ethos and I know they are going to do just fine.
Georgina Watson (Nee Hold).
Our school has a great reputation for winning trophies - but that's nothing new!  Here's a photo showing the newspaper articles of our winning 1979 Netball Team and 1980 Quiz Team:
Muskham Winners 1979 & 1980. Thanks: Lorna Swain.
Each year we have our class photo taken.  Mrs Sandra Garwood sent us these class photos taken between 1977 and 1982.  Can you spot anyone you know?  Does somebody you know have a mum or dad in the photo who looks very similar to them?
Class 1 1977 Thanks to Sandra Garwood
Class 3 1977 Thanks to Sandra Garwood
Class 3 1978 Thanks to Sandra Garwood
Class 4 1978 Thanks to Sandra Garwood
Class 4 1980 Thanks to Sandra Garwood
Class 5 1980 Thanks to Sandra Garwood
Class 5 1982 Thanks to Sandra Garwood

Between 1984 and 1987, pupils at the school created "Village Trails" for each of the five local villages.  Can you still follow the trails today? Are the landmarks still the same or have some changed?

Thanks to Mr John Gray (North Muskham) for providing scans of each trail.

I attended Muskham primary school from 1984 to 1988/89 with my sister Angela Gregson.  We have many photographs but I thought I would send this one of a play we did at Thorsby Hall taken 1986 or 1987. I am not 100% sure of the year. A video was also taken.  I now live in Perth, Australia, along with Angela.
Sandra Antcliff (nee Gregson)

I cant really remember this memory myself that clearly as it was 1988 (When I was 6) but the newspaper article from the Newark Advertiser attached shows what happened. A number of pupils from the Muskham Primary school entered a painting competition and won. Amazingly I still have this TSB account open now and I'm 33. 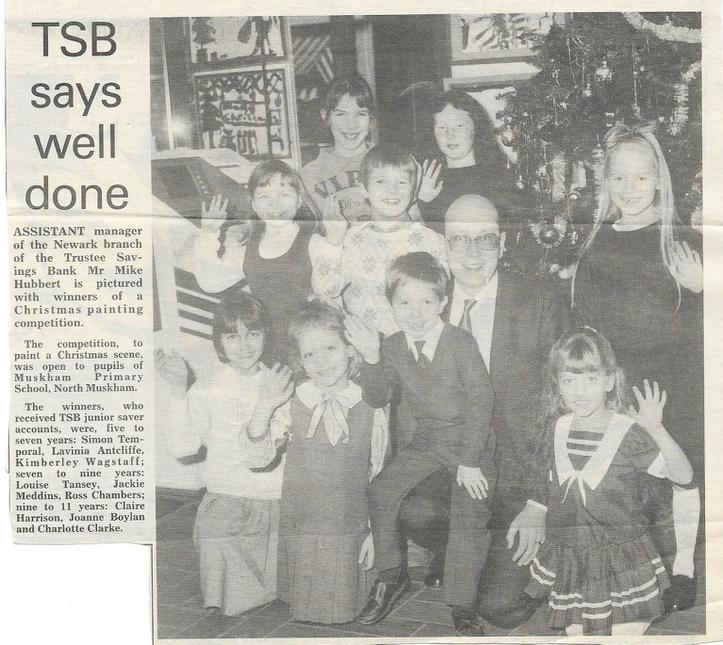 Here are some photographs attached from when I attended Muskham Primary School in the 1980s.

This one is from Mrs McCellend's class,  I’m first row, 5 from the right: 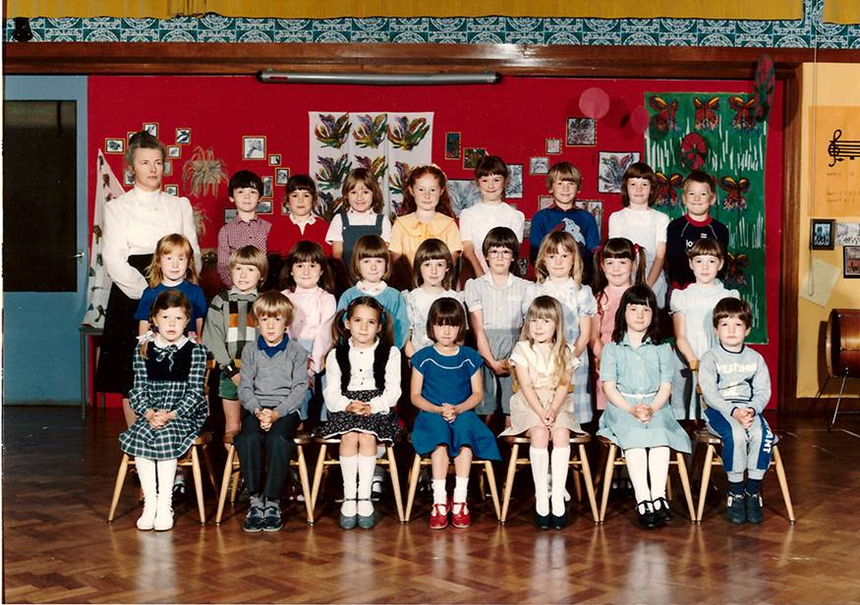 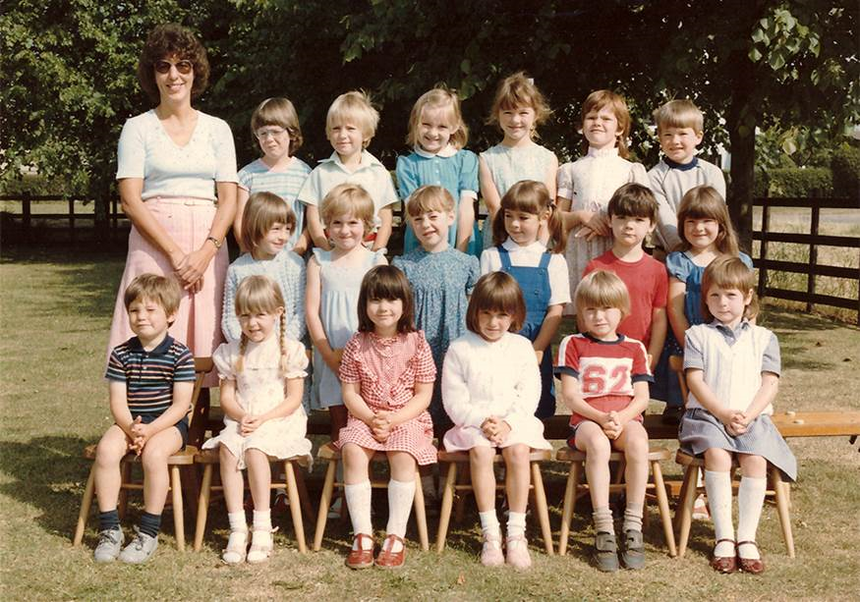 I have also rememnber a piece of embroidery I did whilst at Muskham; my Mum still has this hung on her wall. I can remember doing sewing a lot at school, some of our first tasks were to sew and embroider our names onto our hymn book covers for assembly. I still love embroidery today. I can also remember embroidering a grey and white rabbit that was selected to hang on the back of the piano in the main hall. I know it was there for many years after I left.
Kind regards
Simone Carr (then Temporal)

I loved my time at the Muskham school. I was lucky enough to be part of the very successful few years of the Muskham School football team where we were winning games and trophies for fun. One year we even entered into the Lincolnshire trophy to gives us more of a challenge. The photo of the football team (below) with our haul of trophies we won I believe is from 1991/92. The main reason for all the victories was mainly down to Mr Lane on the left. He was an excellent football coach.

I remember one time, Mr Lane's had us playing so well that we were beating the Mount school in Newark by double figures by half time. To try and even it up the Mounts PE teacher made just Muskham school play with offsides and linesman to try and even it up. This didn't work and I think it ended around 19 or 20 nil by the end. It was quite common for us to beat teams by double figures. Sadly none of us ever went onto lead successful professional football careers which now in my later years has lead me to believe our success was all down to Mr Lane and how he had us playing and enjoying our football rather than how skilful we were. Although Iain Wolfenden use to score hat tricks for fun. 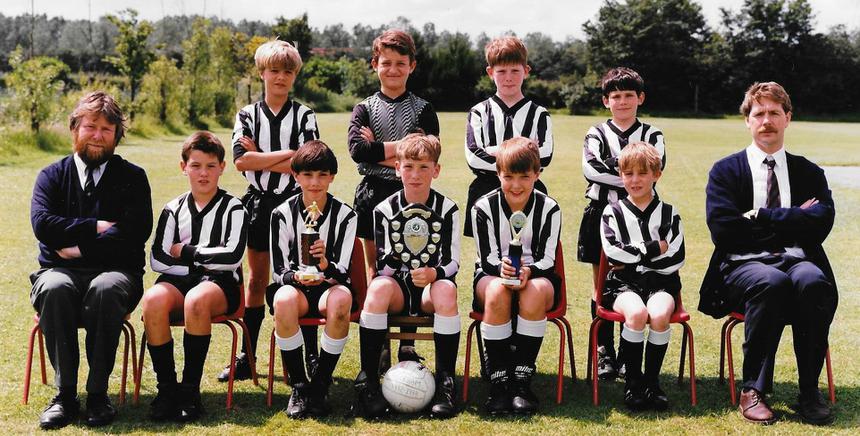 I hope the memories continue to be made and I'm sure the school will make it to its 100th anniversary.

Ben Reed emailed us with his memories of being a Muskham pupil:

Trying to pick the best bits from seven years is difficult, but I remember being incredibly fond of all of the teachers and staff, in my time they were - Miss Davison, Mrs Gilroy, Mrs Guy, Mrs McClelland, Mrs Smith, Mr Lane and Mrs Hancock.

I even have vivid memories of the "dinner ladies" - Mrs Bowen, Mrs Matthews and Mrs Whalley are the ones I remember most. Mrs Bowen was distinctly less tolerant of naughty behaviour, and I remember one distinct occasion where Charles Symcox and myself were caught red-handed by her engaged in some sort of mischief (I think we were throwing stones) and were frog-marched - literally - to stand outside Miss Davies's office for a telling off.

I seem to recall being stood in that little dark nook just off the main hall, hoping Miss Davies would be tied up on the phone call she was on long after the bell rang to mark the end of lunchtime, thus meaning we could quietly return to our classroom, and avoid a telling off in the process.

Alas, the bell never rang, the phone call ended and discipline was duly delivered - it was the worst ten minutes of my life at Muskham.

Trying to list everything that was good about the school would take more time than I have, but other things I remember fondly are:
- Mobbing Mrs McClelland for a go on the state of the art Acorn computer in her class; in particular a prized go on the 'Magic Telephone' computer game.... the computer was in such demand it was on a stand resembling a filing cabinet that had locking doors and the game was guarded like the Crown Jewels.
- What a badge of honour it was to be the first in class to begin a new colour of Ginn Mathematics textbook.
- The wildlife garden and pond down the side of the building. It was a beautiful place, except for the time somebody shoved me into the pond. (I keep listening out for this tale on Simon Mayo's Radio 2 show!)
- Mr Lane's sarcasm - in particular his remark about what "a lovely rocket" my opened-out pair of compasses was as I sat there, one eye closed, tearing it through space!
- Mr Lane's sense of humour.
- Mr Lane's beard.
- School plays, in particular the play about the environment and pollution and getting to act the role of an enormous lobster/crab... the costume was a very elaborate creation by Mrs Guy I believe, and featured a bright orange shell, pincers, the lot! I believe we even performed this play on stage at Newark Palace Theatre.
- Swimming at the old Southwell Leisure Centre on Monday afternoons.
- The residential trip away you were treated to at the end of Year 6, I believe ours was Kingswood.

Happier memories include watching Mrs Stephenson at the piano in morning assembly playing the hymns - I remember thinking how beautifully she played and I've no doubt whatsoever that watching her play is what inspired me to take up playing the piano myself. Sadly, I never got to be in one of Mrs Stephenson's classes... I think at the time of her retirement I was still one of the 'little ones'.

In closing, it is fair to say Muskham holds a very special place not just in my life, but within my family. My late mother, Alison Reed (née Howell) attended the school and was born in 1961, so would likely have been one of the first to attend the current school on it's opening in 1965.

I attended the school between 1988 and 1995, and in 2014 was delighted to find out my son Lawrence Reed had won a place at Muskham, making him the third generation of the family to attend this fine school. He is currently a member of Year 1 and is clearly enjoying his time there.

From left to right: